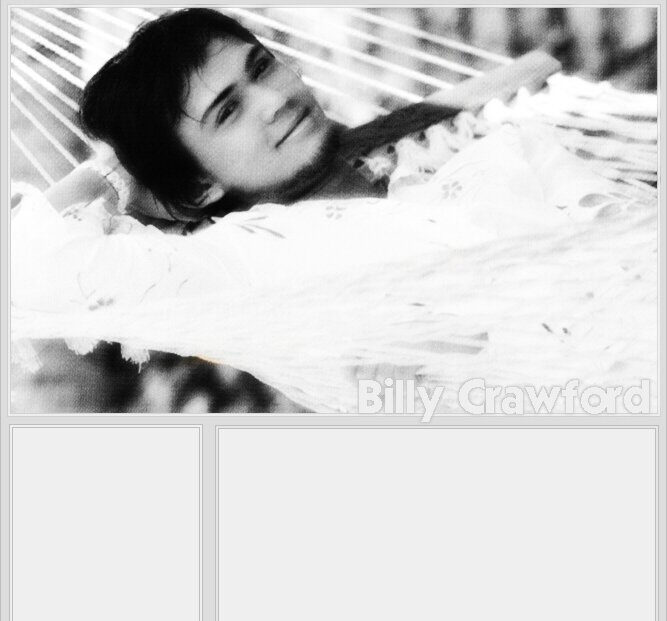 If there is one true entertainer in this world, it has got to be Billy Joe Crawford. Born at the 16th of May 1982, discovered 3 years later while he was dancing on a table at a bowlinghall. Not much later, he was on a few commercials at the Phillipines, made some movies, and was on a show, where his real sing-carreer begon, show calls That's Entertainent!

When he was 13 years old he went on stage together with his big Idol, Michael Jackson. He performed at the MTV Awards as a backdancer. From that moment, Billy was a true artist, and his carreer only got better.

Time past by, and the lil long-hair kid dancing on a table, was already 15. He recorded his first album called "Billy Crawford" and it went straight into the charts at the Phillipines. Unfortunatly his foreigncarreer didn't last long. After a year, everyone forgot who he was. Billy took small-beginning break. But after a few accidents (he was in hospital and when he just got out of it, he fell of the stairs in front of it, and got back in hospital the same day), the break already lasted more then 3 years.

Billy thought it was time for a new image, a new album and he actually wanted to start over. He cut his hair off, changed it to spikeys, and started recording at the studio for his 2nd album: Ride. And that's where his Europe-carreer begon. His first single of this album, Trackin', went straight to number one in Holland & France. His second single When You Think About Me, was also a huge succes, and many of succes followed.

Spring 2004, his first "big" movie will be released in many countries. It's called the Exorcist (part 4: The Beginning) and hopefully it will be a huge succes!

Screaming girls, Tv-shows, big gigs, it's just Billy's normal life. But for us, he will always stay the little kid dancing on a table, and we'll never forget him, cos (you have got to admit it's true!) he's just the best!